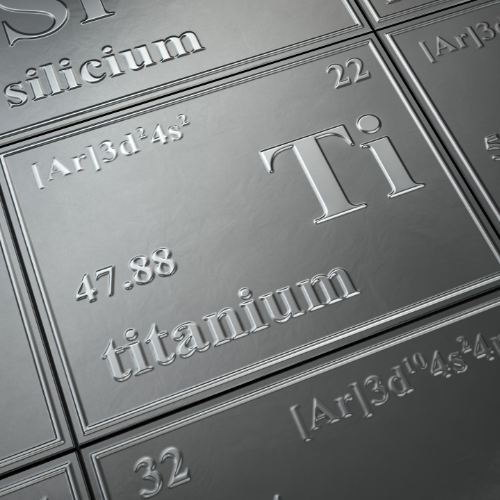 Titanium (Ti) implants are used in the field of medical devices, thanks to the high biocompatibility and bioactivity of this material.

At the moment, there is a great amount of research aimed at improving and modernizing the use of this precious material.

In particular, the research would seem to focus on two fields:

1) the study of the antibacterial activity related to the functionalization of titanium with nanosilver particles and graphene oxide;

Antibacterial activity and functionalization of titanium

Infections associated with prosthetic implants are caused by bacterial adhesion and the subsequent biofilm formation, an extracellular polymeric substance produced by bacteria that acts as a shield as can block the penetration of antibiotics and immune cells.

New interesting approaches are trying to prevent the formation of these biofilms thanks to the development of coating strategies that use materials with antibacterial properties.

In this context, silver (Ag) is a valid element.

In particular, thanks to its large surface and its higher reactivity compared to silver tout court, it may be used nanosilver.

Furthermore, in recent research, a biocompatible and biodegradable polymer approved by the FDA (Food and Drug Administration) and named nanosilver/poly (dl-lactic-co-glycolic acid) -coated titanium (NSPTi) was used in order to stabilize the particles of nanosilver.

The implants thus obtained showed not only excellent antibacterial but also osteoinductive properties.

In addition to the combination with Ti, Ag nanoparticles can also be bound to graphene oxide (GO).

The GO can be electrochemically loaded onto the surface of the Ti-Ag to improve its osteogenic properties. In an interesting work, it was studied the antibacterial activity of the Ti-GO-Ag complex which showed a clear antimicrobial activity through different mechanisms, among which: production of reactive oxygen species, induction of endocytosis, aggregation and cell lysis.

It is known how Ti wear processes can generate peri-implant inflammatory reactions and considerable phlogistic loads.

The latter can lead, in the presence of concomitant patient risk factors, to the failure of the implant outcome.

Titanium, in fact, undergoes through the combined action of corrosion and wear (tribocorrosion) which results in the release of metal ions and debris (nanoparticles – NP) that alter the homeostasis of local cells.

In order to investigate this aspect linked to the use of the Ti, recently some Authors have developed an osteoblast-like spheroid model, that is a cell culture conducted in a 3D system with zones of heterogeneity and nutrient and oxygen gradients, capable of imitating the implant and peri-implant environment.

The results surprisingly revealed that the treatment of osteoblast-like spheroids with different NP grades of TiO2 (Nano-Titanium Dioxide) for 72 hours did not significantly change their vitality. Very high TiO2 NP concentrations affected the cell cycle of osteoblasts without, however, interfering with their ability to differentiate and mineralize.

Overall, the results of these researches underline the potential clinical and therapeutic applications and the versatility of titanium, when coupled with other reactive elements and the therapeutic potential of TiO2 NPs in the prevention of bone resorption in implant therapy.