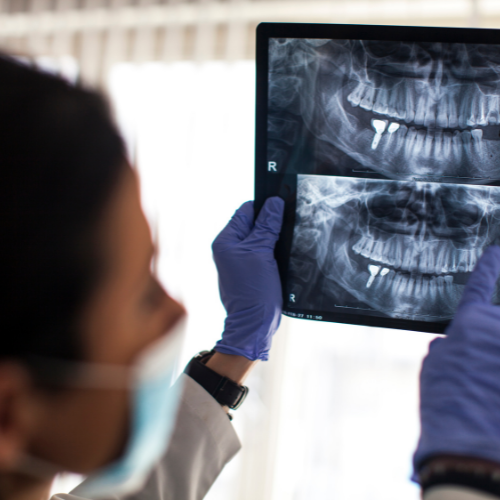 An update on the role of bone density

An adequate preoperative assessment of the available bone is important to address the selection of surgical technique and the type of implant, particularly in immediate loading procedures. However, the results of fairly recent studies that have evaluated the relationship between bone density and primary and secondary stability are not always consistent. For example, while some studies indicate that only primary stability correlates significantly with bone density, others show a significant relation between bone density and both primary and secondary stability. Other studies, on the other hand, have failed to demonstrate an effective link between implant stability and bone density. This lack of data consistency data is likely to result from the different evaluation methods used to determine and analyse bone quality and stability. Therefore, objective measurement of implant stability would be a valuable tool for obtaining standardized results especially in the clinical setting.

Methods for evaluating implant stability: can we consider new parameters?

Unfortunately, some of the methods available today (X-ray, Periotest®, reverse torque, histological analysis) are not very sensitive and may be influenced by the operator or they may be invasive. The two methods most commonly used to assess implant stability are implant stability quotient (ISQ), measured by resonance frequency analysis (RFA), and insertion torque (IT). RFA is a non-invasive quantitative measurement that allows an assessment in terms solidity of the implant-bone attack. IT, on the other hand, represents the maximum torque necessary to anchor the implant, in terms of friction between bone and implant. Both methods can be used after implant insertion.

Lately, however, several research groups have been focusing on the investigation of new parameters that may be more “predictive”. Among these, the torque-depth curve integral, which measures the amount of energy necessary to achieve implant positioning. In a recent in vitro study, a group of Italian researchers compared torque-depth curve integral with IT, ISQ and reverse torque. The authors placed the implants in expanded polyurethane blocks at different densities, capable of simulating the mechanical properties of bone tissue from D1 to D4, measuring their primary stability based on the above listed parameters. The results showed not only that the curve integral was a reliable measure of primary stability, as it correlated significantly with the other well-known parameters, but that it was also more sensitive and varied linearly with respect to bone tissue density differences. These results indicate that this method may be potentially a new parameter for measuring primary stability and orient the subsequent loading strategy.

Implant design: how does it affect primary stability in relation to bone density

The choice of a specific implant design or its thread is aimed at improving primary stability, especially in the case of poor bone quality (class D4) or in post-extraction surgery.

In general, implants with a larger diameter show better primary stability due to a higher BIC (bone-to-implant contact ), as well as pointed implants due to the larger diameter in the crestal region. In particular, with regard to the characteristics of the thread in relation to bone density, double helix implants provide a high primary stability even in denser bones (D1) as they are capable of engaging the bone with greater precision; implants with a deep and therefore very sharp double helix coil instead ensure easy engagement in the less dense bones (D4), generating a lower compression force and a greater cutting force. Some authors also focused on the shape of the drill used during the operation which could affect the size of the osteotomy site.

Bone density and implant shapes are therefore the main factors of primary implant stability. Finally, it should be noted that primary and secondary stability, the latter of which is measured after surgery and is an indication of osseointegration, may be linked. In fact, it seems that implants whose primary stability is below a critical limit will not achieve a certain secondary stability, to which another important element contributes: implant surface, which we will discuss in another article.

This website uses cookies to improve your experience while you navigate through the website. Out of these, the cookies that are categorized as necessary are stored on your browser as they are essential for the working of basic functionalities of the website. We also use third-party cookies that help us analyze and understand how you use this website. These cookies will be stored in your browser only with your consent. You also have the option to opt-out of these cookies. But opting out of some of these cookies may affect your browsing experience.
Functional
Functional cookies help to perform certain functionalities like sharing the content of the website on social media platforms, collect feedbacks, and other third-party features.
Advertisement
Advertisement cookies are used to provide visitors with relevant ads and marketing campaigns. These cookies track visitors across websites and collect information to provide customized ads.
Necessary
Necessary cookies are absolutely essential for the website to function properly. These cookies ensure basic functionalities and security features of the website, anonymously.
Performance
Performance cookies are used to understand and analyze the key performance indexes of the website which helps in delivering a better user experience for the visitors.
Others
Other uncategorized cookies are those that are being analyzed and have not been classified into a category as yet.
Analytics
Analytical cookies are used to understand how visitors interact with the website. These cookies help provide information on metrics the number of visitors, bounce rate, traffic source, etc.
SAVE & ACCEPT